The State Education Building, an indispensable and unforgettable part of the Albany streetscape, one of the most distinctive pieces of classical architecture in the country and purportedly the longest Corinthian colonnade, was dedicated precisely one hundred years ago. In the century that has passed, the State Museum that once drew throngs of schoolchildren into the building to lick a salt pillar and marvel at the Cohoes mastodon has moved a few blocks to the south, and the palatial home to the state’s education bureaucracy is largely off limits to the public. But we can and still do appreciate its incredible beauty from outside. 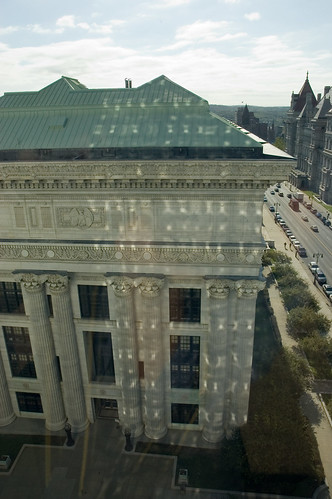 One hundred years ago, the opening of the State Education Building was a Very Big Deal Indeed. The dedication exercises covered three days, October 15, 16 and 17, 1912. Delegates from educational institutions all over the country, all over the world, came to the ceremonies. There was a dedicatory procession with a very clear pecking order. In addition to perhaps 200 colleges and libraries, there were city and village superintendents, members of local boards of education, district superintendents, and high school principals.

The Chancellor of the University of the State of New York was then Whitelaw Reid, who was elected by the Board of Regents in 1906. Whitelaw Reid was an editor and owner of the New York Tribune, a friend of Horace Greeley, a leader of Liberal Republicans who had such a career that his position as the Chancellor of the state education system isn’t mentioned in Wikipedia and barely touched in his two-volume biography. His biographer seemed to find that his time as Ambassador to France, Ambassador to the Court of St. James, vice presidential nominee (with Benjamin Harrison), and time on the peace commission after the Spanish-American War were of more importance. (When he died, news of his passing was sent to President Taft by King George.) But in fact he had important influence on the education system, being a firm advocate of separating politics from education.

Was there speechifying at this dedication ceremony? Oh my god was there. The transcripts run over 200 pages just of speeches. The congratulatory letters seem perfunctory in comparison. At the end of three days, the venerable Chancellor Reid was still holding forth with breathless prose like “The Board of Regents would feel very meanly of itself and would deserve to be thought meanly of if in this hour of its triumph it did not gratefully welcome to this platform those former officials of the State who have been of service in the earlier struggles that today reach their culmination, and if it did not hold in grateful memory those of them …” Sorry, drifted off while copying it. You get the gist.

Tomorrow: Who was there.

One thought on “The Dedication of the State Education Building”