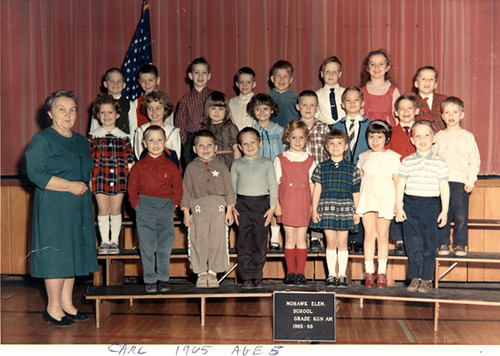 Because I don’t have any good photographs of the outside of my elementary school, I’ll start with this charming photograph of my kindergarten class inside the gym. This was the Mohawk School on Ten Broeck Street between Riverside and Sanders avenues. We’re shown here in the gymnasium/auditorium, on the risers we would also use for every concert and event in the auditorium. The teacher is Miss Hamlin, who fit the mold of pretty much every other teacher in that school — indeterminate age way north of 50 (it seemed like 70 at the time), gentle but firm demeanor, brooking very little nonsense. Sorry to say that only by out-sourcing to my Facebook friends from high school have I been able to identify more than half of these kids, even though most of us passed through seven years in the same school together. I’m in the checked shirt just right of center in the middle row. Apparently I didn’t get the mimeo about wearing a tie, but neither did the kid in the cowboy outfit. 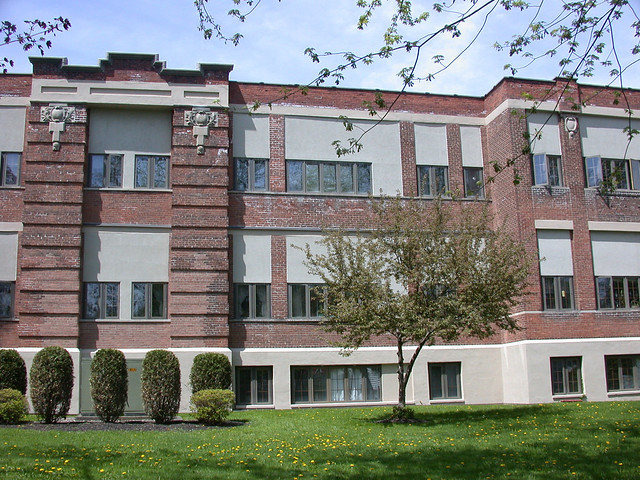 The original Mohawk School was built in 1870, on Mohawk Avenue near Ten Broeck. Its replacement was built sometime in the 1930s (sorry, can’t remember the exact date). The old school became the Colonial Ice Cream factory, and then stood vacant for a number of years before it was torn down in 1962 (the space was then used for parking for the Baptist Church). Its cornerstone was recovered and put on a pedestal (literally) in the lobby of the “new” Mohawk School. In the years that I attended, nearly all the students walked (or biked) to school, no matter how far away they lived — and some walked an astonishingly long way. Parents today would freak at such a suggestion. We weren’t allowed to just walk into the school — we had to line up, single file, one line for boys, one line for girls, and wait for the bell to ring. During extremely extreme weather, the teachers might let us come inside and stand in the stairwell, but we had to maintain silence while doing so (try being 7 years old and silent in an echo-laden stairwell) or they’d send us back out. We walked home for lunch and then came back, with enough time for a few
rounds of dynamite or cutthroat in the schoolyard before the bell rang
again. Only kids who lived a REALLY long way away were brought in on a bus, and forced to stay through lunch. With shrinking enrollments, the little neighborhood school was closed in 1981. Not long after the building was converted into condominiums, and the schoolyard was developed into additional condos.