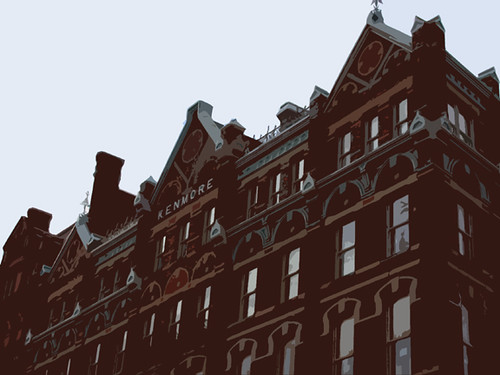 Many know the Kenmore hotel building as one of the handsomest structures on North Pearl Street, and local history afficionados probably associate it with Legs Diamond and the Prohibition-era novels of William Kennedy. Most probably don’t know that the legendary Kenmore, for decades one of Albany’s finest hotels, was built and operated by an African-American named Adam Blake, Jr.

Howell’s “Bi-centennial History of Albany” tells us that Blake was born in Albany April 6, 1830. “He was the richest and best-known business man of his race in this county. Mr. Blake received a Grammar School education. He was a born hotel-keeper. He took to it as a fish takes to water.” His father, also Adam Blake, was probably a slave of the patroon, later a restaurant waiter and was noted as one of the first depositors in the Albany Savings Bank, which opened in 1820. He was also called the Beau Brummel of his day, a noted master of ceremonies for Pinkster, an annual celebration by the African-American community of Albany.

Howell says that Blake Jr. started a restaurant on Beaver Street in 1851, then moved to James Street, and then to the corner of State and Pearl, before taking up the hotel business by becoming proprietor of Congress Hall, a noted hotel across from the old capitol, in Academy Park. That was in 1866, just a year after the Civil War had ended, and Blake ran Congress Hall until it was demolished in 1878 to make open space below the new Capitol. Blake took the proceeds and built the Kenmore Hotel, on the southwest corner of North Pearl and Columbia streets, which opened in November 1878. Blake achieved acclaim not only for his race but for the quality of the lodgings, and the Kenmore quickly and for many decades was known as one of the city’s finest. Seneca Ray Stoddard, whose guides to the Adirondacks were influential in the development of American tourism, listed only the Kenmore for those seeking lodging in Albany, and called it “First class in every particular.”
Blake died early, on September 7, 1881, survived by his wife and four children, and his wife continued to manage the Kenmore for some years.

An Albany Family Story; a Rise to Fortune from Slave to Hotel Mogul.

Adam Blake Sr. was born about 1773 in an area south of Albany (possibly New York City) and brought to Albany as a slave by a local merchant Jacob Lansing as a young boy to serve the Van Rensselaer estate. (In the NYS 1790 census, there are 15 slaves listed on the estate.) As an adult, Blake was manager of the household staff at Van Rensselaer Manor, home of the Stephen Van Rensselaer III (the “Last Patroon”). In 1803 he married Sarah Richards in the Dutch Reformed Church (now known as the First Reformed Church) on North Pearl St. (Notably, this was the same church attended by Alexander Hamilton while he was in Albany and there is no doubt their paths crossed.)

The relationship between Van Rensselaer and Blake appears to have been more than slave and master. Blake was a trusted confident, yet Van Rensselaer didn’t free Blake until about 1811 or later, despite the fact that Blake had married a young woman, Sarah Richards, probably another Van Rensselaer slave in 1803. In later years Van Rensselaer confessed deeply regretting his failure to free Blake at an earlier date, but made no explanation.) Nonetheless, when Van Rensselaer died, Adam Blake led his funeral procession.

After becoming a free person of color Blake continued in the employ of Van Rensselaer although his obituary refers to connections with Governor DeWitt Clinton. Blake enjoyed a position of esteem throughout the Albany community, among both White and Afro-Americans citizens; he was, by all accounts, a very elegant (he was called the “Beau Brummel of Albany”, intelligent and charming man.

He and his family lived in the 100 block of Third St. between Lark and S. Swan, on land that was previously part of Patroon holdings (probably given to him by Van Rensselaer) and owned several adjacent lots. Blake was a major figure in the Afro-American community in Albany, involved in the first African school in Albany in the early 1800s. He was immersed in abolitionist activities; he was one of the notable speakers during the 1827 Albany celebration of the abolition of slavery in New York State and was a key figure in the National Colored Peoples Convention held in Albany in 1840.
When Adam Sr. died in 1864 at the age of 94 his obituary said “.. he was in all respects a remarkable man… and ..”always commanded respect by that high order of good breeding and courtesy towards all for which he was proverbial”.

Blake’s son, Adam Jr. was adopted – we know nothing of his birth parents or antecedents. He was raised at the Van Rensselaer Manor, where he received his early schooling by the side of the Van Rensselaer children. He would become one of the most successful businessmen and entrepreneurs in the 1800s in Albany of either race. While in his 20’s he worked his way up to the position of head waiter at the famous Delavan House on Broadway. Blake rapidly built his reputation as a restaurant proprietor with the opening of his own restaurant on Beaver and Green Streets in 1851. Over the next 14 years he opened two more establishments, first on James St. and the next on State St., each one more upscale. His restaurants were favorite haunts of the young swells, NYS legislators, and diverse governmentos of all stripes. He catered private parties, assemblies, balls and picnics. Young Blake appears to have been a naturally genial, gracious and discreet host. We have a vision of a man who could cater an elegant reception for Albany’s society women or organize a back room dinner for politicians with equal ease.

In 1865 Blake secured the lease for the Congress Hall Hotel, adjacent to the Old Capitol on the corner of Park St and Washington Ave. This was a fabled landmark (Lafayette stayed the night during his 1824 Albany visit), but fallen on hard times. . He acquired 3 adjacent buildings (Gregory’s Row) combined them with the Hotel, and spent a large sum furnishing it in a sumptuous fashion, The Hall was a lucrative concession – its location was favored by legislators and other politicians for lodgings, meals, receptions and meetings.

In 1878 the Hall needed to be demolished for the new Capitol building; Blake received $190,000 compensation from New York State. He used the money to open a large hotel on N. Pearl St. that remains today. The hotel was built for Blake by the son of the late Dr. James McNaughton (former president of the Albany Medical Society) on land they owned; it was named the Kenmore after the small village in Scotland in which McNaughton was born. The hotel was designed by the Ogden and Wright, leading Albany architects, and no expense was spared Not one to let the grass grow under his feet, while the Kenmore was under construction, Blake took over the management of the Averill Park Hotel across the river for the summer of 1879.

McNaughton’s willingness to build the Kenmore for Blake to his specifications speaks volumes about the general estimation of his business acumen and confidence in potential for its success. While he benefited greatly from his father’s connections and those of the Patroon, he clearly had natural and innate ability.

The Kenmore Hotel opened in 1880. It was Adam Blake’s dream- a marvel of modern technology and comfort; it was called “the most elegant structure on the finest street in Albany”. It was wildly successful, not only for its convenience, but for its level of service. It included hot and cold running water (and new-fangled water closets), an elevator, telephones and, of course a fine and palatial dining room.

Throughout his life Adam Jr. moved easily among both the Afro – American and White communities, and was as widely respected as his father had been. He apprenticed a number of young Afro-American men who went on to manage major hotels throughout the New York State, including the Clarendon Hotel in Saratoga Springs; Leonard Jerome and family were guests (daughter Jenny would marry Lord Randolph Churchill and give birth to Winston.)

He was known as a generous man “who never turned away a stranger or neighbor in need”. In 1881 beautiful glass window was dedicated his name in the Israel African Methodist Episcopal Church on Hamilton St (the oldest Afro-American church in Albany, established in 1828.) Adam Jr.’s activities in the Abolitionist movement are not documented as are his father’s, but the Blake family house on Third St. was situated directly behind that of Stephen Myers on Livingston Ave., leading figure in Albany’s Underground Railroad. It is improbable to think that neither father nor son was not involved in the Railroad.

Unfortunately, Blake died an untimely death in 1881 at the age of 51. He didn’t really get to revel in his success. At the time of his death his private fortune was estimated in excess of $100,000, an astonishing sum for anyone, let alone the son of a slave. For the next seven years the Hotel was managed by his widow, Catherine, who was equally good at business, accumulating real estate all over the Albany, including 2 row houses on Spring St. near Lark St. that stand today When the lease on the Kenmore Hotel expired in 1887, Catherine left the hotel business, selling the furnishing and the Hotel’s goodwill for a tidy sum to the new owners. While the Blakes were involved with the Kenmore, they lived on Columbia St., but when Mrs. Blake gave up the Kenmore, she moved to First St to an elegant townhouse (that also remains today), between S. Hawk St. and S. Swan St., taking her place among the other wealthy families of Albany, just above the Ten Broeck Triangle.

Thanks to Paula Lemire https://www.facebook.com/ARCbeyondthegraves/ and her contributions to the research on the lives of both Adam Sr. and Jr.