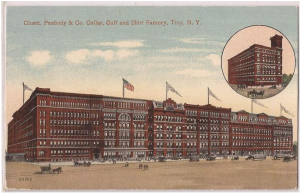 For some time, Hannah Montague was forgotten, even as the industry she is now credited with creating boomed. Detachable collars (and then cuffs) proved all the rage, making laundering simpler, allowing shirts to last longer. In today’s world of cheap textiles, we don’t appreciate how few garments a denizen of the 19th century may have owned. Individual items of clothing were often listed in wills; even the wealthy didn’t have an overabundance of clothing. Hannah’s invention, along with the subsequent development of the industrial sewing machine, helped to change that, but for many years her contribution was forgotten.

As late as 1908, the advertising manager of Cluett, Peabody & Co., perhaps the largest shirt manufacturer in the country, was suggesting that there should be a memorial to “the revered memory of the founder of the collar industry, the Rev. Ebenezer Brown, who is said to have made the first collar ….”

Cluett, Peabody & Co. was the  company that lasted the longest. It produced a number of brands, of which Arrow Shirts was probably the most famous. For the longest time, Arrow Shirts were synonymous with Troy. the Troy plant was thought to be the largest shirt factory in the world, and it sprawled along the river. In 1912,  the New York Times would report that Cluett, Peabody & Co., “the largest manufacturers of collars, shirts, and cuffs in the world, is to become still larger.” At that time it had factories at Troy, Rochester, Corinth, and Waterford, NY; Leominster, MA; South Norwalk, CT; and St. Johns, Quebec. The combined annual output of those plants was then 7,000,000 dozen collars and 500,000 dozen shirts.

The company endured patent suits (John Van Heusen accused them and others of stealing his unstarched collar), and Asian-made counterfeits (in the 1960s, proving nothing is new). They navigated re-attachment of the collar and the move into synthetics. But local plants couldn’t survive the trend that moved manufacturing out of the Northeast. As all the local textile business moved south (before moving out of the country), by the late ’80s the only vestige of Cluett, Peabody was the Technical Services Headquarters of the Sanforized Company, and that was soon gone. (Sanforizing, a technique for preventing shrinkage, was developed by Sanford L. Cluett.) Most of the sprawling factories have been demolished, though a section has been preserved as Hedley Park Place.

In 1989, Cluett & Peabody moved its last offices out of Troy. Some smaller manufacturers remained, but the heyday of the Collar City was gone. Arrow Shirts still exist, a subsidiary of Phillips-Van Heusen, though I honestly haven’t seen one in some time.