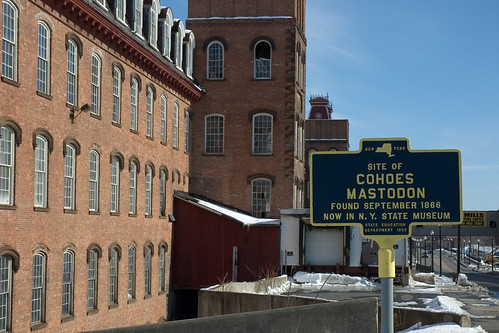 Not everyone was elated by the discovery of the Cohoes Mastodon in 1866. Some went so far as to call it a humbug, which was saying something in those days.

Arthur Masten reported in his The History of Cohoes, New York that there were a number of letters published in several newspapers by people who claimed that the skeleton was, indeed, a humbug. They knew it was because they had talked to old inhabitants, usually unnamed. (This “I know a guy who knows a guy who knows the real story” thing continues, of course, to this day.) Masten quoted one particular example, an 1870 letter published in the Rutland Herald. This was a few years after the discovery, and the mastodon was now residing in Albany, but it’s likely the then-recent furor over the Cardiff Giant hoax had stirred the pot again.

There is another sell in Albany, quite equal to the cardiff [sic] giant – but not got up expressly for the occasion. I mean the Cohoes mastodon, so called, now on exhibition in the Geological rooms in this city. It will be recollected that in 1866, as a party at Cohoes were digging to secure a reliable place as a foundation for a factory, the workmen struck upon the bones of a large animal, which some of the savans declared to be those of a mastodon, but all were not agreed upon this name. Henry M. Gaine, a geologist of Saratoga, wrote two or three articles for the newspapers in which he asserted that the teeth of this fossil were not those of the extinct mastodon. But he was ridiculed for expressing such sentiments and the term mastodon was applied to the skeleton of the animal when it was set up for exhibition. It seems a great pity to take away this name, for with it departs the great antiquity of these bones, and with it the finely wrought theory of their having been taken from that huge pot hole of peat by an immense glacier, that separated the different animal parts, and deposited them in many different places.

But we will tell a story related to us by Mr. Wm. J. Bradley, of Ballston, N.Y., a respected and truthful citizen of that place, aged sixty-four years. He says he peddled tin for Wm. J. Benedict, of Schenectady, for two or three years, and for several years he followed a caravan – June, Titus, and Angevine’s. It was his custom to travel from place to place in the night and sell his wares each day at auction near the tent of the caravan. In the fall of 1833, he was going from Schenectady to Troy, following the elephant, which in those days was taken from place to place in the night to escape observation – and when near what is now Cohoes, but which then had only a house or two, he found that the elephant had fallen dead in the road. The keeper had sawed off the tusks and was cutting the body into pieces that it might be drawn out of the road. This was no small job, for the elephant was one of the largest ever exhibited in this country. Mr. Bradley had a nice span of Canadian ponies on his peddler’s cart. He took them off, and assisted by Aaron Ackley, then of Troy, who led one of the frightened horses while Mr. B. led the other, they drew the body off by piece meal, and dropped it into a bog hole some six or eight rods distant, the identical one, as Mr. B thinks, in which this so called mastodon was found.

Among the several things wrong with this conspiracy theory (such as that the tusks would surely have appeared to have been cut, if that were true), recent investigation of protein taken from the mastodon’s left femur shows, according to the State Museum, that the “elephant” died 11,070 years ago, give or take 60 years. That would make Mr. Bradley well over 64 years old, calling into question just how truthful he really was.